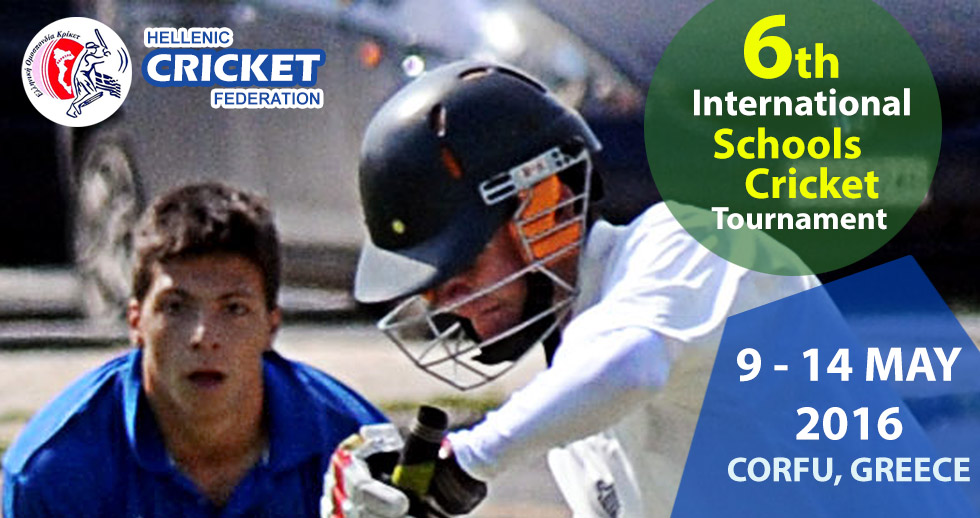 Hellenic Cricket Federation (H.C.F.) invites 16 school groups or teams from across the globe to participate to the 6th INTERNATIONAL SCHOOLS CRICKET TOURNAMENT 2016. The tournament will be held in Corfu/Greece on 09 – 14/05.

To secure your place in the Tournament a deposit of 500 euros per school/team is required. As per every year we will run a strict “first come first served” policy. Schools or teams who wish to participate to the Tournament must submit the application form completed and make the deposit no later than 31/01/2016.

Format: T20 Tournament. One innings per side, each innings limited to a maximum of 20 overs.

Players date of birth: All students/players must have been born from 1/1/1999 – 31/12/2002. Dates will be checked by the Tournament Referee at the Managers and Umpires meeting which will be held before the start of the tournament. Exceptionally at the tournament will be able to participate up to three (3) younger players. The teams who wish to use younger players must submit to the Hellenic Cricket Federation the Special Dispensation – Underage application form signed by the guardian of the player at least two (2) months before the start of the Tournament.

Tournament venues: Three grounds will be used for the Tournament. One is the Marina cricket ground which is 25km away from the hotel. The second is the Espianada square ground which is situated at Corfu town and 20km from the hotel. The third ground is situated in the hotel and is walking distance from the accommodation. All grounds have artificial pitches. All teams will play in all grounds.

Clothing: The tournament will be played in white clothing or other colored uniform except the color of the ball which is red. Only rubber shoes are allowed during the match. (No spiked shoes).

Team officials and participants: Team officials will be fully responsible for the discipline of their team members during the event and period of stay. Participants are advised to ensure the safety of their belongings at all times.

Tournament Umpires and scorers: Every team is required to provide one umpire (with umpiring diploma if it is possible or cricketing experience) and one scorer (in a good level) who will participate to all the matches of the tournament. These two should be notified in the application form.

Medical facilities: Medical boxes will be available at all venues. In case of an emergency there will be full cover from the National Centre of Urgent Needs.

Opening ceremony: Will take place on Sunday afternoon (18.00) at Espianada square ground. All team members must attend the ceremony. Teams should be uniform dressed (with their playing clothes) and the officials must wear tie. Schools or teams should bring with them a flag of their school and their country flag (mandatory).

Gala dinner dress code: Teams may wear team evenly shirts and trousers or blue jeans (or other uniform appearance) and the officials must wear tie. The event must be attended by all school groups.

Photo shooting: There will be a photo shooting of all the participants of the tournament. The date and time will be set according on match schedule. Teams should be uniform dressed (with their playing clothes) and the officials must wear tie.

In all participant teams will be given diplomas.

Weather: The weather in Corfu during May is good and well suited to the playing conditions. The average temperature will be around 20-25 degrees.

Please feel free to contact us with any queries you may have.

THE PRESIDENT THE GENERAL SECRETARY