Participation in the Antipodes Festival in Australia, March 2011, EL.O.K 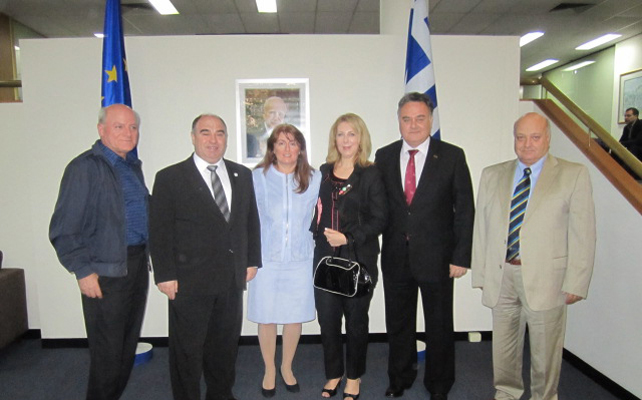 Participation in the Antipodes Festival in Australia, March 2011, EL.O.K

The Greek Cricket Federation participated in the Antipodes Festival in Melbourne purpose of advertising cricket, Corfu, the Ionian Islands and Greece in general to all visitors of events. The mission, consisting of President Iosif Nikita, Vice Kyriakos Katsoris, Secretary General Stylianos taste and Board member Athena Altana, He arrived in Melbourne Tuesday 1 March with a rich collection forms , printed material concerning the Corfu Cricket, the Ionian Islands and Greece in general determined to show off the Greek Cricket and to guarantee the uniqueness of Corfu and the Ionian Islands as a sports tourism destination. The stand of the Greek Federation Cricket visited thousands Greco- Australians and other nationalities visitors who were surprised by the fact that cricket is played in Greece, They discussed with the members of the mission and said they were excited by the presence of EL.O.K in Australia.

During their stay had a meeting with the homogeneous state of Victoria Minister for Multicultural Nicholas Kotsira who praised the effort and said helper EL.O.K any future action regarding the promotion of cricket and Greece, supporting fully the efforts of Aussie- Greek Cricket Federation. Meeting held with the old familiar President of the World Inter-Parliamentary Union of Hellenism and Australian federal MP John Pantazopoulos, who guided the Greek delegation in the House Victoria having much time for discussion of development issues EL.O.K in which said helper. Additionally pledged to carry out actions that the Parliament team to come to Corfu in May to conduct a friendly cricket match. . Alongside conference ahead of Greek MPs next May in Athens debated the prospect of Members visit to Corfu.

Meeting held with the Consul General of Greece in Melbourne Helen Lianidou which after being informed of the presence of the EL.O.K the Antipodes and big promotion printed materials, congratulated the members of the mission for the advertising of Greek Cricket and generally in Greece. Alongside its capacity as a former consul of South Africa provided useful information and promised to contribute with all its power in such planned actions EL.O.K in South Africa. During the stay of the mission were three radio interviews in Melbourne, two in the Greek-speaking state radio range station across Australia SBS, and one in 3XY radio station in which developed the positions and objectives of both the Greek and the Greek-Australian Cricket Federation. In interviews particularly impressed by the fact that through cricket Greek children 3rd and 4th generation visited and will visit their homeland Greece. Also dothisan interviews in newspapers the News and New World where articles were published with praise for EL.O.K.

Publicity and promotion of sport and sport tourism in Corfu, the Ionian Islands and the rest of Greece through the media

The New World newspaper published an article entitled «Greece do not like cricket – they love it "while there was a meeting with the editorial board of the journal" OPA ", which hosts articles concerning the Greek Cricket. Meeting was the oldest Association Ithaca Melbourne where members hosted a dinner in honor of the Greek Mission. They showed great interest in the development of cricket in Ithaca and praised the efforts of EL.O.K. and AEOK. Last but not least meeting the joint meeting of the Board of EL.O.K the Greek Australian Cricket Federation. Subject of the meeting validating the "MEMORANDUM OF UNDERSTADING", o stock of activities so far and planning new. Meeting of EL.O.K representatives with the President of Ithaca Nick Varingo association with the other members of the Association was held Wednesday 9 March. The meeting took place in the liaison offices. The president and members hosted a dinner in honor of the Greek Shipping and said they would contribute decisively to the development of the sport in Ithaca.