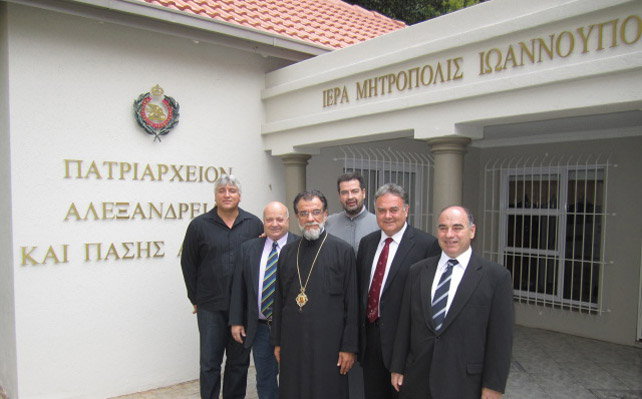 Meeting with Metropolitan of Johannesburg and Pretoria, Eminence Damaskinos

Meeting held with His Eminence Metropolitan Damaskinos, the seat of the Archdiocese. The Greek mission had the opportunity to inform the Venerable, the new strategy towards the development of sport and sports tourism , while inviting the Metropolis to contribute its part in any way.

Meeting with the Consul of Greece, k.Efangelia Secretary

Meeting of the Greek mission with the Consul of Greece in Johannesburg Mr.. Evangelia Bills held in the Consulate area Wednesday 1 February. During the match, the Federation representatives informed, the Consul for trying to attract groups and the development of Greek Cricket and Sports Tourism, through the organization of international sporting events. The Consul found the meeting very constructive and stated its intention to provide assistance and support in El. Ohm. Κρίκετ.

The schedule of meetings of the Greek mission included a meeting with the Director of the standard Greek school «SAHETI SCHOO», n. Soula Krystallidis. the SAHETI, Set in an area 450 acre, with potential 1.200 students and teacher is a diamond of South Africa Foundation. The meeting took place at school, presence of K. George Bizos , lawyer of Nelson Mandela, who has served for many years president of the school, Mrs Nike Sourri, President of the Lyceum of Greek Women, Vice President. Nikos cock,teachers and students delegation. Both Mr.. Krystallidis, and Mr.. Bizos but all those present, They congratulated the mission for the visit of initiative and stressed the importance and anagakaiotita cooperation bodies in Greece with unions, organizations and educational institutions of the Diaspora. Alongside, Mrs. Krystallidis said participation saheti school 2nd International Schools Tournament to be held in April in Corfu.

Call for Diaspora participation in international organizations and in particular to the Greek unions communities and South African schools , addressed to the President and the members of EL.O.K in gathering, held at the Federation of Greek communities and associations. At the rally attended and Archimandrite Michael Visvinis. During the meeting the members discussed ways of cooperation for the development of sport, and the contribution of the Diaspora to support the Greek Cricket. The President of the Federation Mr.. Christopher expressed his confidence that there will be close and productive cooperation with EL.O.Kriket and stated that South Africa Diaspora will support and invest in the development of Greek Cricket in every way.

Meeting with the President of the Greek Community in Johannesburg, k.Efangelo Sculptor

Meeting held with the President of the Greek Community in Johannesburg Mr.. Evangelos Sculptor, who was informed of the scheduled international events. On his part, the president of the Greek community said the desire Greeks of South Africa to keep alive the Greeks and the intention to practical support of the Federation activities .

Representatives of EL.O.K met with Cricket Development Manager of two leading South African sports organizations Mr.. CasimSuliman, with whom they discussed cooperation issues. Ο κ. Suliman congratulated the Federation for the effort and promote the country internationally through sport and said the participation of major academies of South Africa on sporting events next year.

Meeting with representatives of the association JOBURG CRICKET CLUB held the Greek mission during their stay in Johannesburg. The welcome they have given them were significantly honored and warm, while ounantisi completed with positive emotions. The JOBURG CRICKET CLUB stated his intention to visit Greece for cricket matches and the meeting concluded with the participation programming in the 2nd International Schools Tournaments.

Meeting with the Association of Ithaca

Meeting of EL.O.K representatives with President. Michael Raftopoulos and members of the Board of the Charitable Association Ithaca South Africa took place at the association offices. The Ithaca expatriates expressed their desire to cooperate with the EL.O.K to develop the sport in Ithaca , You desire new generation is returning to Greece . The president briefed EL.O.K. Raftopoulos that the Federation has submitted relevant development plan in DIN, that and hopefully be exploited to boost the development of Cricket. On the side of Mr.. Raftopoulos said the Cricket will be a visit to a vehicle in South Africa Ithaca Expatriate home.